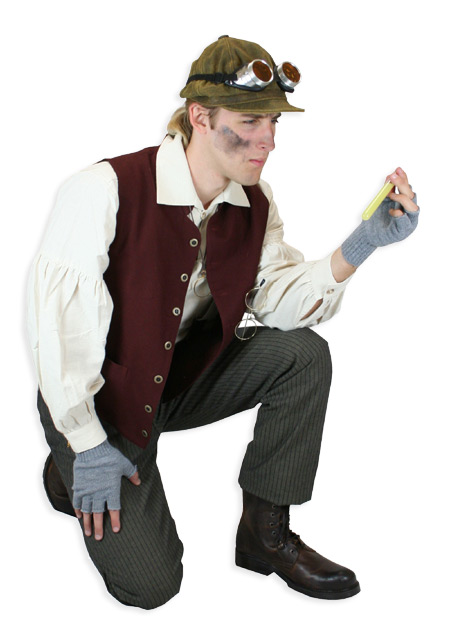 With no formal training but years of practical experience in chemistry, Arlo Beesom seeks new solutions to solve the problems of a dystopian society. The catalyst for his life’s calling was a junior chemistry set received from his father during a rare childhood visit. His father promised to visit again soon, but then disappeared forever in a cloud of smoke.

Mixing up beakers and test tubes to ‘amaze and delight’ his friends, as suggested by the kit’s pamphlet, Beesom quickly learned that he had a natural gift in the physical sciences. Unable to afford university tuition, he took on an apprenticeship with a local chemist and all went well until they had a moral disagreement about the end use for chemicals such as cyanide, uranium and ammonium nitrate. Thusly, he set up his own laboratory and now experiment to his heart’s delight. Today he can be credited with the random ionization of nuclear subparticals and is noted in academic journals for Beesom’s Law of Alchemy.

Need sizing info? Click any product for full details, including a sizing chart.

Still have questions? Ask a question about this outfit.

To Purchase This Outfit:

1. Select the items you wish to add to your cart.

Customer Reviews of our Store
Phil
CA, United States
I ordered a size too large and had to exchange the hat. To expedite shipping on the right size, I went ahead and reordered. The process was easy, my card credited back within hours of historical Emporium receiving return, the new shipment had already gone out and arrived earlier than expected. Nothing but a great customer experience and how we all wish everything would go in life. I'm totally happy.
Uncle C
MI, United States
Excellent service and products. Delivery was early, and the shirt and vest I ordered are an exact fit. Will order again.
Anonymous Customer
AL, United States
Great transaction!!
Jake
WA, United States
I purchased this lovely vest for a Christmas party. Quality was excellent for the price and I couldn't be more happy. The fit was spot on as well.
Anonymous Customer
CA, United States
Excellent
UtahCraig
ME, United States
Vest was great quality, arrived on time for our wedding... All boxes were checked,!